Building from a Social Base

Churches play a big part in shaping people’s beliefs, moral judgements, and actions and church leaders are the ones responsible for how all this plays out. 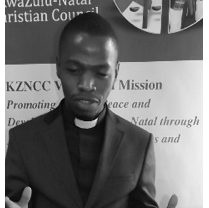 Rev Swelakhe Shelembe of the KwaZulu-Natal Council of Churches who runs the project, facilitating one of the community dialogues

The KwaZulu-Natal Council of Churches (KZNCC) recognizes this responsibility and the difference it can make in changing social attitudes. It has sent out fieldworkers to the far-flung corners of the province to hold community dialogues about sexuality, sexual orientation, gender identity, and spirituality. In creating these safe spaces, social trust is built, allowing community groups to discuss issues which they otherwise would not have had a chance to reflect on together.

Over 3,000 families and 12,000 people have participated in the dialogues which involves gay and lesbian people talking about their experiences of living in such communities. For the communities in Impendle, Pietermaritzburg, Escort, Watersmeet, Edendale and Colenso it has meant a huge growth in awareness about sexual and reproductive health rights, gender based violence and an integrated spirituality.

Young people have been supported to use drama to reach other youth with a message of inclusion. Theologians have been engaged in research that is helping to change the church’s narrative about sexuality, shifting it away from prejudice and exclusion to a more affirming love of all people. Bible study groups have allowed for reflection among church leaders and congregants about homosexuality. And a directory of caring pastors has been developed so people can find accepting church ministers in communities across the region. 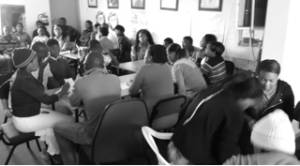 Participants at a youth dialogue in the KwaZulu-Natal Midlands.

On the strength of this rich experience, the KZNCC has worked with gay and lesbian groups in KwaZulu-Natal to engage the provincial government and parliament to defend the safety, promote the social inclusion, and advance the protection of the rights of sexual minorities.

However, change is slow. Fieldworkers have found that church leaders and church members find it difficult to speak freely about their views on sexuality in front of each other – for fear of saying the ‘wrong’ thing. More effort is needed to empower individual church leaders to openly express their views in support of the dignity of every person, irrespective of sexual orientation or gender identity. The community dialogues need to be deepened and expanded.

But the remarkable fieldworkers conducting many of the dialogues have been working without pay as well as adequate information and publicity materials to back their efforts. The Other Foundation is committed to giving the KZNCC further support to do more – if it can raise funds to give more support.