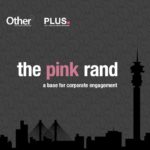 The pink Rand is a term which has gained momentum among marketers since the nineties. However, the concept has grown to not just represent the spending power of the LGBTI community, but their influence across social circles and constructs as both a social grouping and economic segment.

This paper looks into the pink Rand as a means to engage corporate South Africa in the drive to foster more diversity with respect to the LGBTI community.

Click here to download a copy of The pink Rand, a report prepared for the Other Foundation and PLUS. The LGBTI+ Business Network, by Nascence Advisory.