There is a general belief that African people are deeply homophobic and unaccepting of gender diversities. But what does the African public really think? The truth is that we don’t really know because hardly any work has been done to gather and analyze the views of the public in a structured way in Africa. Until now. For the first time, there is scientifically valid, nationally representative data to inform social dialogue and advocacy, public policies, and academic debate. The results of the survey confirm some common-sense realities which have not been tested in research on this scale up to now. There are also some surprising new findings. 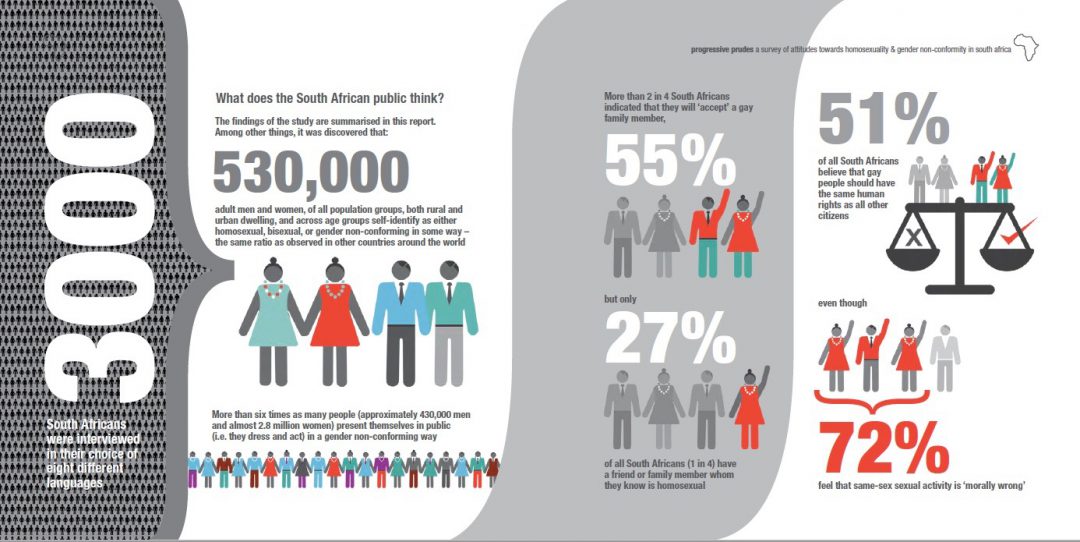 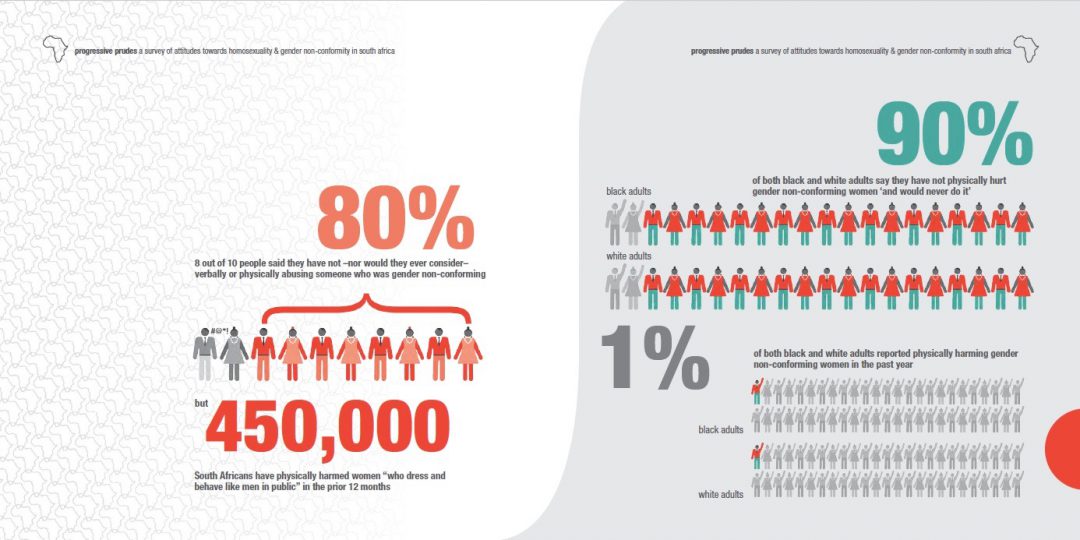 To give African researchers who live and work on the continent the opportunity to explore the data first, the Other Foundation has embargoed the data from the survey beyond this initial report, for 12 months. Offering limited research funds to support selected areas of interest that strengthen and support activism, the Other Foundation invitates institutions and individuals interested in accessing the data to apply for access to it. 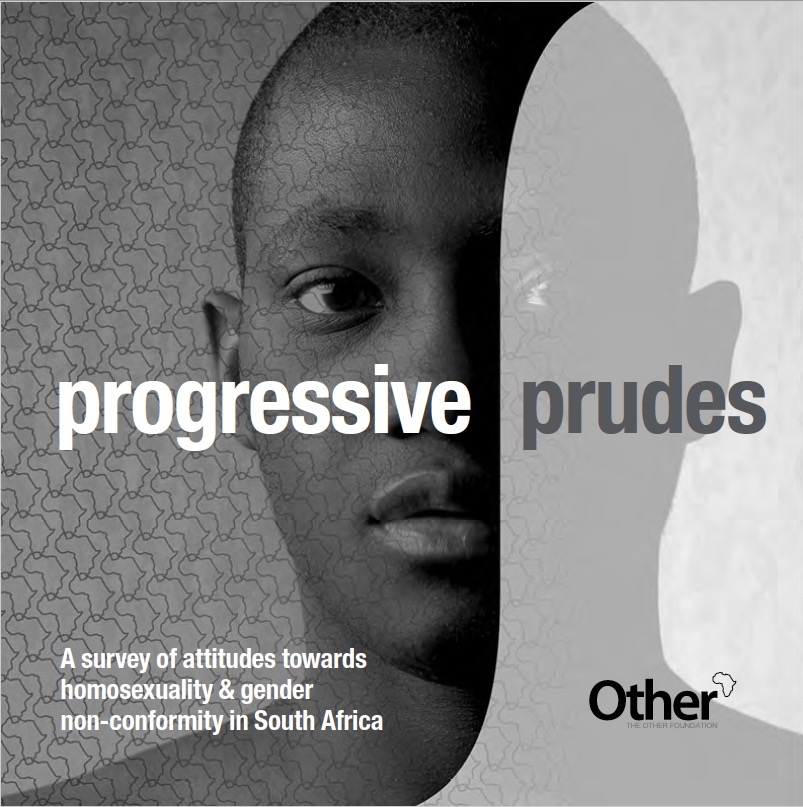 Click here for easy viewing on your handheld device.

Prof Pierre Brouard is the deputy director of the Centre for Sexualities, AIDS and Gender (CSA&G) at the University of Pretoria and a registered clinical psychologist. He has worked in HIV since the mid 1980’s and at the Centre since 2001. His interests include sexualities, gender, human rights, stigma, governance, leadership, structural drivers of HIV, prevention and psychosocial and care issues.

Prof Melanie Judge is a queer feminist activist and scholar. She has played a prominent role in advocacy and law reform on sexual and gender rights in South Africa, and was lead editor of the book To Have and To Hold: The Making of Same-sex Marriage in South Africa. Melanie is an adjunct associate professor at the Centre for Law and Society, in the Faculty of Law at the University of Cape Town.

Prof Mogopodi Lekorwe undertook one of the first major surveys of attitudes towards homosexuality in Africa.  He led an Afrobarometer national public attitude study in Botswana that included a range of questions exploring attitudes to same-sex relationships.   He is based at the University of Botswana and serves on the editorial board of the academic journal Public Policy and Administration Review.

Dr Zethu Matebeni is a Senior Researcher at the Institute for Humanities in Africa at the University of Cape Town, where she is the convenor of the Queer in Africa series. She received her PhD from Wits University and has been furthering research interests and publishing on queer issues, sexuality, gender, race, HIV and AIDS, African film, cinema and photography. Dr Matebeni is also an activist and film maker.

Prof Thabo Msibi is the acting dean of the School of Education at the University of KwaZulu-Natal.  His areas of interest include gender and sexual diversity and schooling.  He holds a PhD from the University of Cambridge which explored the sexual and professional identity constructions of African male teachers who engage in same-sex relations. He has worked on the development of curricula to support teachers on LGBTI issues. He sits on the board of the Gender and Education journal.

Mr Xhanti Payi is a leading African economist who is based at Nascence Research Insights, an economic policy research institute focused on labour and international trade.  Xhanti is a regular columnist for South Africa’s Business Day newspaper and the Daily Maverick. He occasionally hosts radio shows and is a business commentator on the Johannesburg-based PowerFM radio station.  He is the co-chairperson of the board of trustees of the Other Foundation.

Prof Vasu Reddy is the dean of the Faculty of Humanities at the University of Pretoria.   Prior to this he worked at the Human Science Research Council (HSRC) as the executive director of the Social Development Research Programme.  Vasu has published widely in his fields of expertise, notably gender studies and HIV/AIDS. He is widely published in policy briefs, chapters in books and several internationally accredited journals.

Dr Finn Reygan is currently deputy director in the national Department of Basic Education of the South African government, seconded from his post as Senior Researcher at the Wits Centre for Diversity Studies (WiCDS). Previously, while managing research at Gay and Lesbian Memory in Action (GALA), he was the principal investigator for a GALA/UNESCO study on diversity-based violence in school systems across southern Africa.

Mr Ben Roberts is a research specialist in the Democracy, Governance and Service Delivery unit at the Human Science Research Council (HSRC).   He was research fellow in the Population and Poverty Studies Programme at the School of Development Studies at the University of Natal.  His research interests include the analysis of poverty and inequality dynamics, and sustainable livelihood development.

Dr Carla Sutherland is a gender and sexuality policy researcher. She was an associate research scholar at the Center for Law, Gender and Sexuality, at Columbia University Law School (New York).  She previously worked at the Arcus Foundation where she led the Foundation’s international Sexual Orientation and Gender Identity programme. Carla holds a PhD in Social Policy from the London School of Economics.

Mr Niel Victor is a registered clinical and research psychologist, currently reading for a PhD.  He also runs a successful private practice working with individuals, couples and families. Victor is a partner in the market research business, Curiosity Counts.  Curiosity Counts offers boutique market research services to a range of clients. Niel has two decades of market research experience. He is currently on the executive committee of the Sexuality and Gender Division of the Psychological Association of South Africa.

Progressive Prudes: A Survey of South African Attitudes to Homosexuality and Gender Non-Conformity

The Other Foundation and the Human Sciences Research Council (HSRC) today released the results of a ground-breaking national survey of public attitudes to homosexuality and gender non-conformity in South Africa.

For the first time in Africa, the report provides statistically sound, nationally representative data on this topic.

“There is a general belief that people in Africa are deeply homophobic and unaccepting of gender diversities. But the truth is that, up to now, we haven’t really known what the African public really thinks because hardly any work has been done to gather and analyze the views of the public in a structured way in Africa. The data is essential to craft our own African narrative about the lived realities of homosexual and bisexual women and men, as well as transgender and intersex people,” said Neville Gabriel, chief executive officer of the Other Foundation.

“We hope to soon expand this survey to other countries in our region,” he said.

The report is named ‘progressive prudes’ because it shows that the majority of South Africans think that gay and lesbian people should have the same human rights protections as other people and should be part of the cultures and traditions of South Africa – even though the majority also think that sex between people of the same sex is morally wrong.

Over half a million adult South African women and men, across all population groups, living in both rural and urban areas, and across all age groups, identify themselves as homosexual, bisexual, or gender non-conforming – consistent with similar population ratios in other parts of the world. Almost six times that number of South Africans (3 million) present themselves in public in a gender non-conforming way: about 430 thousand men and nearly 2.8 million women.

Well over half the population (55 percent) say that they will “accept” a gay family member but only one in four people (27 percent) report having a friend or family member whom they know is homosexual.

The vast majority (8 out of every 10 people) have not, nor would they ever consider, verbally or physically abusing someone who was gender non-conforming.

“Moderately religious” South Africans are the most “tolerant” of gay and lesbian people, even when compared to the “least religious”.

Since 2012 there has been a tenfold increase of South Africans who “strongly agree” with allowing same-sex marriage.  The proportion of people “strongly disagreeing” dropped by half – from 48.5 percent then, to 23.4 percent now.

Crain Soudien, chief executive officer of the Human Sciences Research Council (HSRC) said: “The results convey the considerable effort still required to ensure that society understands and respects the rights of LGBT people in the country. A sizable share of South Africans for instance, continues to express intolerant views of homosexual sex and gender non-conformity. In addition, self-reported levels of past and potential future prejudice, abuse and violence against gay and lesbian people is also a source of concern.”

“At the same time, the study offers some encouraging signs,” he said. “Such knowledge serves as an important basis for further promoting social justice by enriching and shaping social dialogue, advocacy, and policy interventions.”

The survey was commissioned by the Other Foundation and undertaken by the Human Sciences Research Council (HSRC) as part of the South African Social Attitudes Survey conducted at the end of 2015. More than 3,000 South Africans were interviewed in their choice of 8 of South Africa’s most widely spoken languages.

The Other Foundation has embargoed the data from the survey beyond this initial report for 12 months, to give African researchers who live and work on the continent the opportunity to explore the data first.   Institutions and individuals interested in having access to the data during this embargoed period can apply for access to it. The Foundation will offer small research grants to support work in selected areas of interest.

The Other Foundation released the results of the survey ahead of World Suicide Prevention Day on 10 September 2016 to remind the public that tens of thousands of gay, lesbian, and bisexual women and men, and intersex and transgender people, take their lives as a result of social attitudes that fuel hatred, social exclusion, and violence towards homosexual and gender non-conforming people – especially those who are most vulnerable as a result of other social and economic injustices.

A study by OUT LGBT Wellbeing in Pretoria found that 31% of LGBTI people think about suicide and 21% actually attempt suicide in South Africa – well above the national average for the general population.

The Other Foundation has released the report with a call to religious communities, trade unions, business executives, traditional leaders, NGOs, government agencies, parents and families of LGBTI people to intensify efforts to build a just and caring society, free from from discrimination, exclusion and harm towards LGBTI people and all other social groups who are seen as “other”.